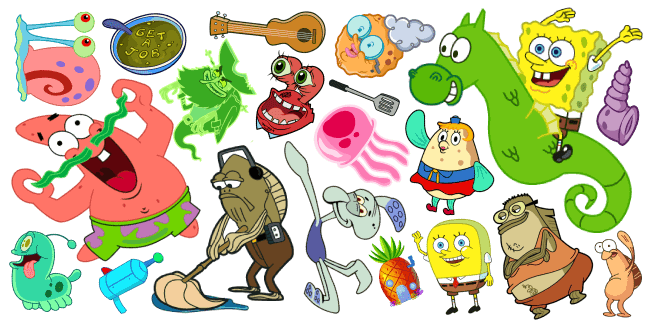 American animated series SpongeBob SquarePants was initially created as an educational comic book titled The Intertidal Zone. In early 1999 Nickelodeon picked up the idea of starting an animated series that had a huge success with a very profitable media franchise.

The creator of the series had his previous job at an oceanology institute so most of the characters in the SpongeBob animated series are funny and appealing sea creatures. Each one with its own charm and diverse habits.

The action revolves around a secret Krabby Patty recipe that only SpongeBob can cook. But many hunts that recipe and Sheldon J. Plankton in particular, who is trying to steal the formula again and again.

In SpongeBob collection of fanart cursors, we will gather the cursors of memorable series characters and activities such as Mr. Krabs with a dollar cursor, Sandy Cheeks cursor, Patrick Star cursor, Squidward cursor with his clarinet, Jelllyfishing cursor, Krusty Krabs cursor, favorite Snail pet Gary cursor and many more fanart cursors for you to play with.

SpongeBob Write That Down Meme Curseur

Spongebob Dressed Up as Patrick Curseur

SpongeBob and Mystery the Seahorse Curseur

SpongeBob Put the Money In The Bag Curseur

Mrs. Puff As if I really look like this Curseur

How Many Times Do We Have to Teach You Curseur

Push It Somewhere Else Patrick Curseur