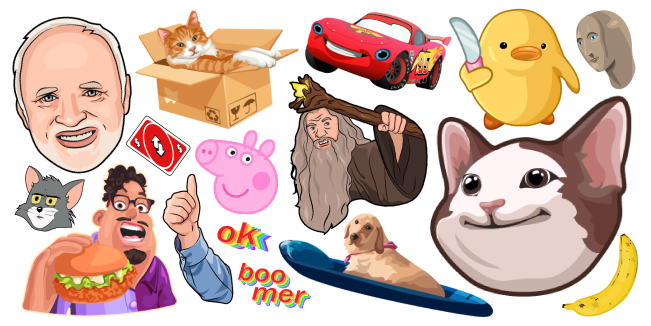 A meme is a humorous image, video, piece of text, etc., that is copied variations and spread rapidly by Internet users. And if they stay popular, they make their way to social networks where they spread even faster. Websites such as Tumblr, Reddit, 4chan, and knowyourmeme are the greatest places for meme users, where new content appears daily, it gains followers, manages to gets its own prophets, dies, gets burned, and somehow resurrect all in one night.

Social media platforms such as Facebook, Twitter, Instagram, and Pinterest are the main means of transportation for internet memes, these are the places where they gain "mainstream" popularity. Memes are dominating social media because of their adaptability, or a user's ability to make a parody or variation of the meme.

Memes are great! First of all, they are hilarious. Mems are property of the internet and their rightful owner, but we add them as FanArt cursors. Whether it's just a Sponge Bob Meme, a Doge meme, or something from a Thugs Life – it makes you smile or even crack up in tears, you have to admit they are good. Next, they're relatable, and sometimes, they are everything you wish you could say but certainly cannot for any reason. I think everyone would like to be able to create at least half of the jokes or phrases that some memes have, but, unfortunately, my humor can never compete with dat boi.

Yankee with No Brim Meme Cursor

Somebody Toucha My Spaghet Meme Cursor

I Am The Lorax I Speak For The Trees Meme Cursor

If It Fits I Sits Meme Cursor

I Know He Ate A Cheese Meme Cursor

The Scroll of Truth Meme Cursor

Wait What is the Dog Doing Meme Cursor

You On Kazoo Meme Cursor

Duck With a Knife Meme Cursor

Get Out of My Car Meme Cursor

Is This a Cursor

It Is Wednesday My Dudes Meme Cursor

Kirby With A Knife Meme Cursor

You Shall Not Pass Meme Cursor

One Does Not Simply Walk into Mordor Cursor

Not Sure If Cursor

Me and the Boys Rhino Cursor

Me and the Boys Vulture Cursor

Me and the Boys Electro Cursor

Me and the Boys Goblin Cursor

This Is Fine Cursor

Shut Up And Take My Money Cursor

Deal With It Cursor