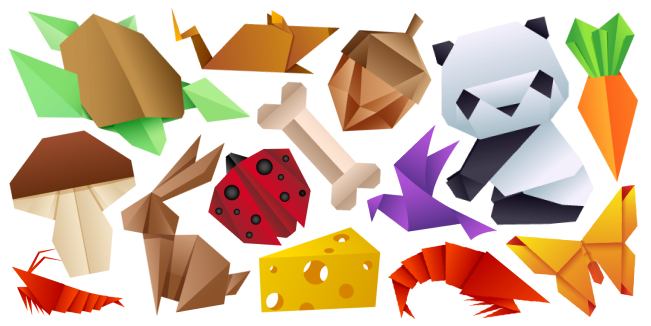 Origami is an interesting hobby and wonderful art of folding paper into various shapes without the help of glue, scissors, duct tape, and the like. By folding a square piece of paper, you can create a variety of beautiful animals, birds, shapes, objects, or insects. Thus, especially for you, we have created an origami cursor for a mouse with Squirrel and Acorn, an Origami Ladybug cursor for a mouse, a fanart cursor with Origami Turtle, purple cursor with Origami Bird.

The amazing art of origami has its historical roots in ancient China, where the paper was invented. For a long time, origami was only available to people of the upper classes, because a sign of good manners was the mastery of the paper folding technique.

Wonderful paper figurines are used to decorate wedding tables, for rituals in temples, for entertaining guests at a ball, for performances in theaters, as well as a design element, an integral attribute of folk festivals in many countries and, of course, as an incredible mouse cursor!