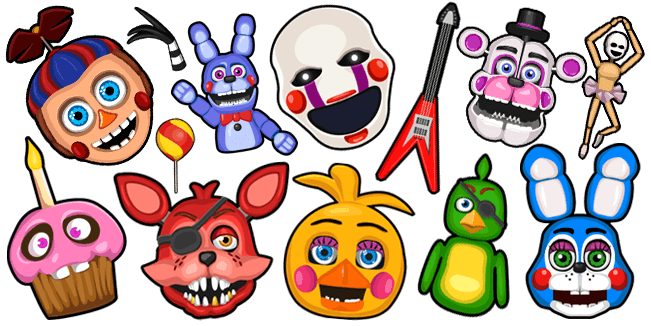 Five Nights At Freddy's or as we all call it FNAF is more than just a game with a great scenario. In this scary story, we meet with Michael Schmidt, who is given 5 nights with Freddy, Chika, Foxy, and other animatronics. Michael seeks an easy job to make some fast cash and he thinks that he finds one in “Freddy Fazbear’s Pizza”. But it turns out that this job is not as easy as it looks.

Our Five Nights At Freddy’s collection of fanart cursors is dedicated to FNAF fans that loved the game and completed it. For those who want to see those spooky characters in their everyday browsing routine. We have fanart and our own cursors of Funtime Freddy, Balloon boy cursor, The Puppet cursor, Toy Bonnie cursor, and many more will be added. Choose your favorite FNAF character cursor and enjoy, they don’t bite… much.