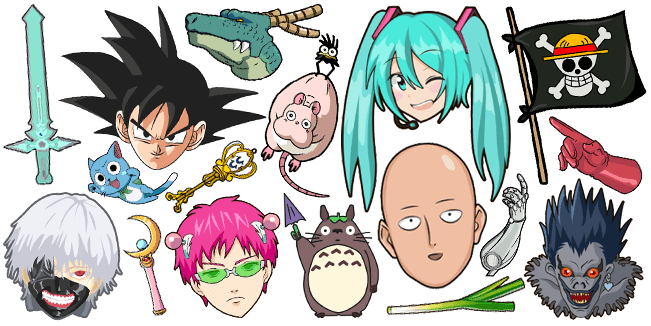 In Japan, there is a special type of animation, which could have invented only in this country. Anime is in great demand all over the world for decades. A special type of drawing, interesting plots, and wide audience coverage.

This genre of art appeared in the middle of the last century. In the course of its evolution, the anime has undergone tremendous changes. Anime has long ceased to be an ordinary children's animation. It is perceived as an art form and is designed for both children’s and adult’s audiences.

Some time passed, and cosplay became a full-fledged subculture. Fans of this art organize into clubs, where they watch their favorite anime, share their impressions and just have a good time. Rights to those anime creations belong to their rightful owners, but we have gathered a separate FanArt collection of anime cursors for you. Whether it's Ken Kaneki Cursor from Tokyo Ghoul, or Goku from Dragon Ball Z, or a classic Hayao Miyazaki Totoro cursor.

The Dragon and the Freckled Princess Belle and Dragon Curseur

Cells at Work U-1146 and Knife Curseur