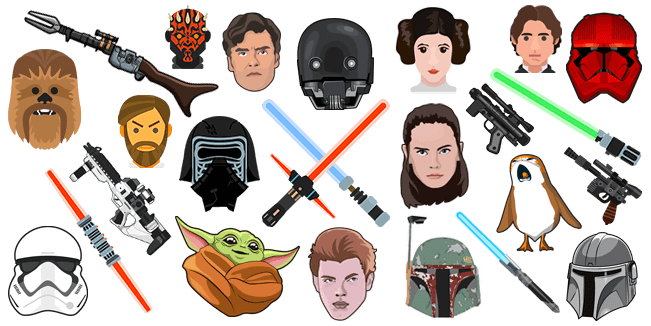 A long time ago in a galaxy far, far away...

We’ve all seen the movie Star Wars a fantastic saga created by an American movie director George Lucas in the early 70s and massively extended later on. The movie had a huge impact on international pop culture and was repeatedly recognized as the best science fiction film. The number of films in the main franchise is approaching 10-11, and that’s not counting the endless number of books, comics, series, games, and cartoons. We are not related to Lucas Art, Disney, or Star Wars so we gathered for you many FanArt works. All of the cursors here are FanArts in the form of free cursors.

Same as you we are also dreaming to be a part of the saga. Swing lightsabers, shoot blasters, fly in a screaming tie fighter over some distant planet or even wash a Millennium Falcon spaceship. To bring all that closer to us – we’ve added a new FanArt Star Wars cursor collection. At least like that we can bring Star Wars a little bit closer.

Choose your side of the force!