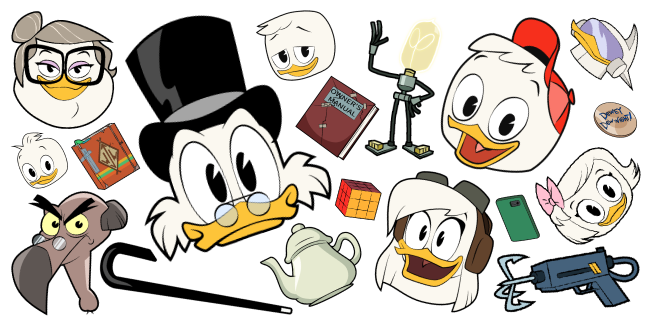 Who can associate childhood without Disney's ducks? DuckTales is Disney's animated television series, which tells us about Scrooge McDuck, his three grandnephews Huey, Dewey, and Louie, and close friends of the group, which are already in our fanart DuckTales cursor collection. The show tells us about their various adventures, most of which either involve seeking out treasure or thwarting the efforts of villains seeking to steal Scrooge's fortune or his Number One Dime.

If you also miss your old friends from this wonderful cartoon, then welcome to the DuckTales cursor collection. Here you can find a fanart cartoon pointer with Fenton Crackshell-Cabrera and Gizmoduck, Huey Duck and Junior Woodchuck Guidebook cursor, DuckTales pointer with Della Duck and Owners Manual, cursor with Webby Vanderquack and Harpoon Hook, Disney pointer with Scrooge McDuck, Bradford Buzzard pointer, Dewey Duck cursor, Mrs. Beakley cursor pack, Donald Duck cursor and much more is on its way to you.