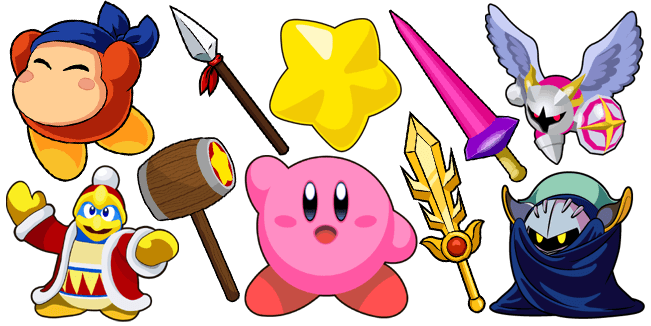 Cute Kirby has been on many fun and colorful adventures over the years! He is always optimistic, cute, and makes you smile! Many fun and addictive games feature this iconic character once created by Nintendo and HAL Laboratory. Most of those games are action games filled with puzzles. Currently, there are over twenty Kirby games with over 34 million copies sold all over the world, which places Kirby games in the top 50 most sold video games of all time!

Our cute little hero is well known for his ability to inhale objects and creatures to gain their abilities, as well as the ability to float. He uses these abilities to defeat his foes, rescue lands, and his home Popstar Planet. On his adventures, as he fights his foes, such as Dark Matter and Nightmare he also often crosses paths with his rivals King Dedede and mysterious Meta Knight. Though Meta Knight can be found as a hero in some games.

Join your cute pink friends adventures with our Kirby collection of fanart cursors. We gathered for you some characters from the Kirby game series as cursors, such as King Dedede cursor, cute Kirby cursor, Galacta Knight cursor, or Kirby Meta Knight cursor. Choose your favorite Kirby cursor and relive those fun adventures!