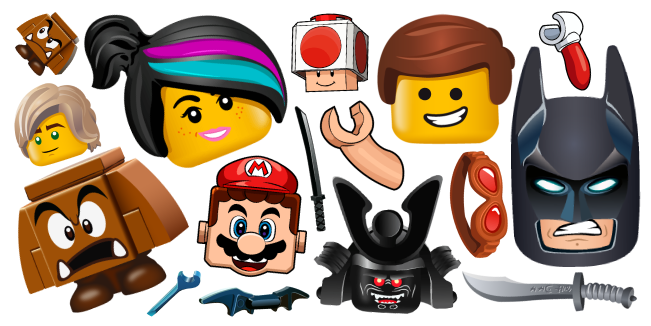 Almost all kids and even adults love the colorful plastic LEGO bricks that have been produced by The Lego Group since 1949. LEGO pieces can be assembled into a large number of different objects, for example, buildings, vehicles, working robots, a scene from a movie, TV series or cartoon, and the like.

The well-known LEGO has expanded significantly and today you can spend time in the Legoland theme park, play computer LEGO games, watch a LEGO movie or TV series. So you can observe The LEGO cursor for a mouse with Batman Movie, the fanart cursor with The LEGO Movie Wyldstyle, and LEGO Movie cursor Emmet Brickowski.

Of course, LEGO continues to delight everyone, so it doesn't stop the production of new construction toy sets, but, on the contrary, teams up with the producers of animated series, games, and cars to create something new. And we have created a collection of LEGO cursors, which containing FanArts and our original creations!