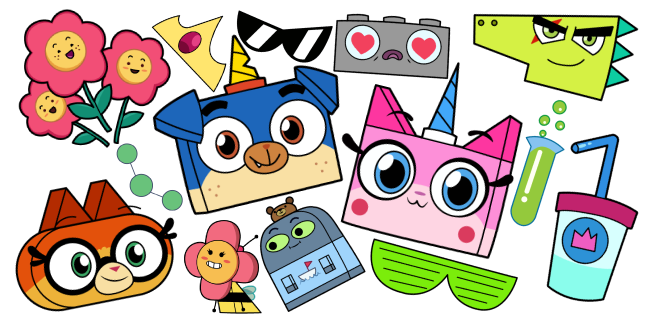 UniKitty! is an American comedy animated television series developed by Ed Skudder and Lynn Wang for Cartoon Network and produced by The Lego Group and Warner Bros. Animation. As the ruler of the Unikingdom, Princess Unikitty has various misadventures in her land with her friends. They also deal with the threats of Master Frown from the neighboring Frown Town.

The series stars the character of the same name from The Lego Movie franchise - the fan-favorite cat-unicorn hybrid and her four other pals - brother Puppycorn, scientist Dr. Fox, bodyguard Hawkodile, and boring, grey 1x3 Lego brick Richard. All of them you can find in our fanart UniKitty! cursor collection.

As ruler of the kingdom, Unikitty has busy days full of royal responsibilities. She is interested in making sure everyone is happy and ridding the kingdom of negativity.

If you enjoy watching these wonderful series, then you are greatly welcome in our fanart UniKitty! cursor collection, where you can find all your favorite characters. Among them are Unikitty cursor pack with Feebee, cursor with Bim-Bom Liebowitz, cartoon pointer Eagleator, cartoon cursor Brock and Brock Kid, fanart cartoon cursor Dr. Fox, cursor pack with Master Alan Frown, Princess Unikitty cartoon pointer, and many other interesting characters.