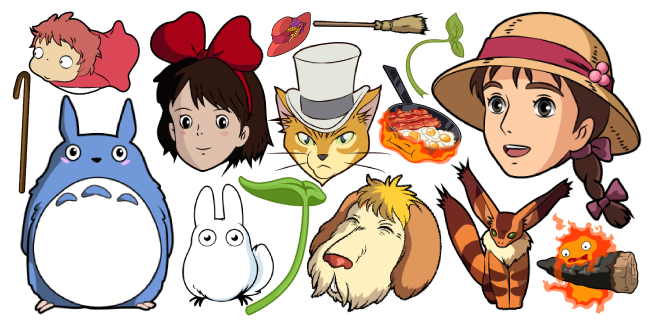 Studio Ghibli is a Japanese animation film studio, known for the high quality of its filmmaking and artistry, founded by Miyazaki Hayao, Takahata Isao, and Suzuki Toshio. We are thankful to them for such masterpieces as Ponyo, Tales From Earthsea, Kiki's Delivery Service, Spirited Away, Howl's Moving Castle, Princess Mononoke and this list can go on for a long time. Ghibli has more than 20 anime films and many of them have won a lot of the Animage Grand Prix awards, the Japan Academy Prize, Golden Bear, and Academy Awards.

The studio mascot and its recognizable symbol is a character named Totoro - a giant cat-like spirit from their anime film My Neighbor Totoro, which you already can find in our Studio Ghibli cursor collection as My Neighbor Totoro anime cursor. People like Ghibli's films because of their great mystical places, but what makes it really phenomenal and breathtaking is the way they combine magic with realism. Watching their anime movies, you believe that these characters can exist in real life.

If you are a huge fan of Studio Ghibli films, you can find your favorite characters as anime cursors. Among them are such fanart cursors as Kiki's Delivery Service cursor with Kiki pointer, anime cursor with Howl's Moving Castle Sophie Hatter, cursor with a Fire Demon Calcifer or Heen, Spirited Away Boh and Yubabas Bird cartoon cursor, Studio Ghibli cursor with Chibi and Chu Totoro, and so much more.

Nausicaä of the Valley of the Wind Nausicaä and Mehve Curseur