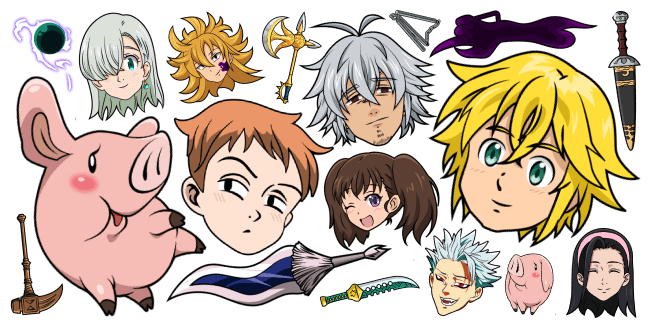 The Seven Deadly Sins is an anime based on the manga by Suzuki Nakaba, which episode 1 premiered on October 5, 2014. The series was produced by A-1 Pictures and directed by Tensai Okamura.

Nanatsu no Taizai anime tells the story of seven powerful knights called the Seven Deadly Sins. This was the strongest unit of the Holy Knights in the Kingdom of Liones, which consisted of cruel criminals who were convicted of serious crimes and the symbols of the seven beasts were carved on their bodies. Ten years ago, before the start of the main plot, they were framed for murdering the Great Holy Knight and now they are forced to hide, as they are considered villains. After a while, the Holy Knights made a state revolution, destroyed the king, and established their own tyranny in the country. Elizabeth Liones, who is the princess of Liones and the king's third daughter, goes in search of the Seven Deadly Sins to help her rid the Kingdom of the tyranny of the Holy Knights.

It is interesting, that each of the Seven Deadly Sins was convicted of a crime against the Liones Kingdom, and the names of Sins (Inanis Gloria, Invidia, Tristitia, Avaritia, Ira, Luxuria, and Gula) were associated with these crimes and reflect these sins. It is worth noting that many of the main characters didn't commit these crimes, but they were falsely accused.

For fans of The Seven Deadly Sins, we have prepared a whole collection of anime cursors, in which you can choose any character you like and make your mouse cursor unique! Our Seven Deadly Sins collection has a lot of cool characters, where you can find FanArt and some own cursors, such as Derieri, Elizabeth Liones and Sword, Sins Guila and Sword, Diane and War Hammer Gideon, Merlin, Hawk, Escanor and Divine Ax Ritta, Ban and Nunchucks, Melascula, and so on.