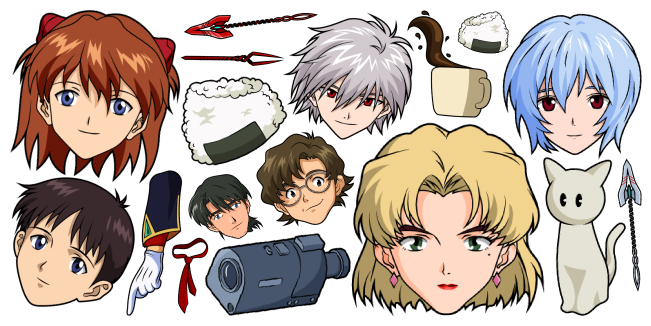 Neon Genesis Evangelion came to us from popular anime and a manga serial, both of which follow the same storyline, but with some differences. The manga was aimed to raise interest for the anime directed by Hideaki Anno, which at that moment was in the creation process.

The main story takes place in an apocalyptic mecha action world with the paramilitary organization NERV and human enemies - Angels. NERV's most important weapon against this hostile is called Evangelions - giant biomechanical humanoid weapons piloted by children in their early teens, which we have a whole collection as cursors. Although Evangelions have other greatest secret mission - to initiate Third Impact, which is a cataclysmic event to evolve humanity further.

If you like this spectacular sci-fi serial and want to see its heroes as anime cursors - welcome aboard! Here you can find the main characters Shinji Ikari, Asuka Langley Sohryu, and Rei Ayanami as Neon Genesis Evangelion pointers for a mouse. Also in our collection, we have Gendo Ikari, Misato Katsuragi, Kaji Ryoji, Kaworu Nagisa, Ritsuko Akagi, Kensuke Aida as anime cursors, and a little bit more.