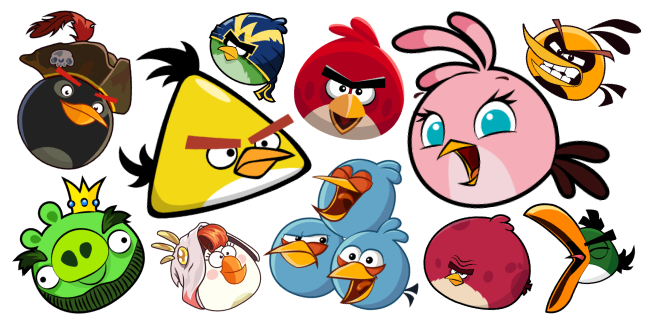 We can bet that you had played this game at least once during your life. Angry Birds is a Finnish game series created by Rovio Entertainment that focuses on the eponymous flock of angry birds who try to save their eggs from green-colored pigs. This game was complimented for its successful mix of fun gameplay, comical style, and pretty low price. It became so popular, that creators made even a televised animated series and two films.

The plot of this game goes around nine birds, among which are Northern cardinal Red, yellow canary Chuck, Mountain bluebirds Jay, Jake, and Jim, common loon Bomb, chicken Matilda, galah Stella, Jamaican oriole Bubbles, emerald toucanet Hal, and Northern cardinal Terence – all them you can find in our Angry Birds cursor collection. They use their slingshot and unique abilities to protect their eggs from the pigs who want to steal and eat them. The eggs are shown as their hope for the future, hoping that one day they would bring peace to the island due to the help of birds like the Mighty Eagle and Silver.

If you are fascinated by this action game about birds and pigs, you can find all of these characters as your fanart cursors like the fanart game cursor with Terence, Stella game pointer, Hal cursor, cursor with Bubbles, Angry Birds The Blues game mouse cursor, Chuck and Bomb pointer, Angry Birds Red and Minion Pig cursor, cursor pack with fanart Leonard game cursor and much more on the way to you.