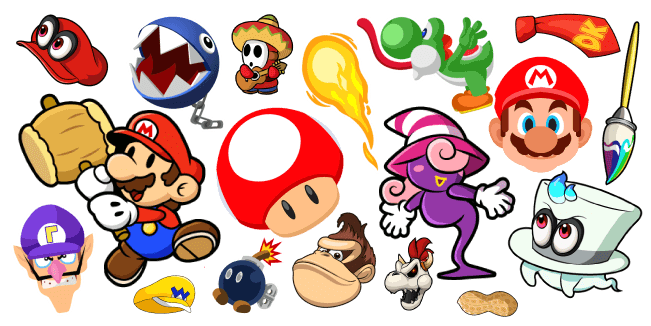 Super Mario is a full stack of games that were created in mid-1985 and received dozens of spin-offs. Mario game series was created by Nintendo featuring Mario as the main character.

Super Mario Bros was a first in the series, a side-scrolling 2D platform game to feature Mario. It established many core Mario gameplay concepts and characters. The objective of most Mario games is to complete levels by defeating enemies, collecting power-ups, and solving puzzles without dying. Most of the ideas are still used in the Mario games.

We all played those games and enjoyed that game world and the characters. That’s why we are starting a Super Mario collection of fanart cursors with your favorite characters. You can find here the main character of the game Super Mario cursor, his brother Luigi Mario cursor, the princess that Mario was saving Princess Peach cursor (princess Toadstool), even the villain Bowser cursor.