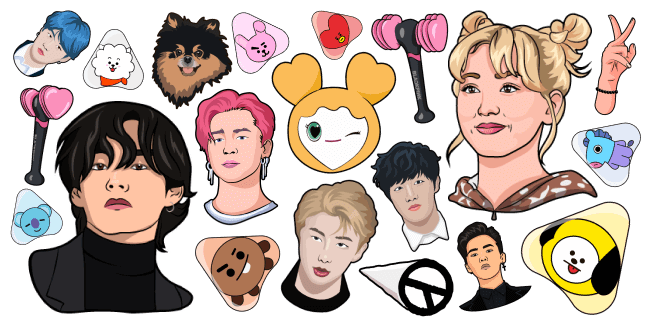 K-Pop or Korean popular music is a musical genre consisting of pop music, dance, hip-hop, rock, rhythm and blues, electropop, and electronic music that started in South Korea and made is way through the whole world. Now kpop is popular not only in South Korea, but it also has millions of fans worldwide. In addition to that K-pop has grown into a popular subculture where a fan is trying to copy their favorite K-pop star’s style, haircuts, looks, and behavior. This resulted in a widespread interest in the fashion and style of Korean idol groups and singers.

There are many k-pop bands in South Korea, there are some that we never even heard of. And the Korean pop music scene also changes rapidly, no one singer is ever on top for very long. There are a few superstars like Bi Rain and Lee Hyori who remain in power the longest, but, as they are all great and the most part of the market is filled with a variety of young k-pop groups such as TXT, BLACKPINK, Twice, Red Velvet and Seventeen. Not to mention the all-time favorites as Girls' Generation, Big Bang, 2NE1, and BTS. They are all Idol stars and very famous grouped singers in Asia and the world.

With respect to K-pop music and k-pop culture, we are starting a K-Pop cursor collection whit our and your favorite K-pop signers cursors and K-pop bands cursors. Currently, in our collection, you can find both fanart cursors and our own, such as BTS Junkook cursor, BTS Suga cursor, BTS RM or Rapmonster cursor, J-Hope cursor, BTS V cursor, Jimin cursor, BT21 cursors, and many more with join our fanart collection soon.