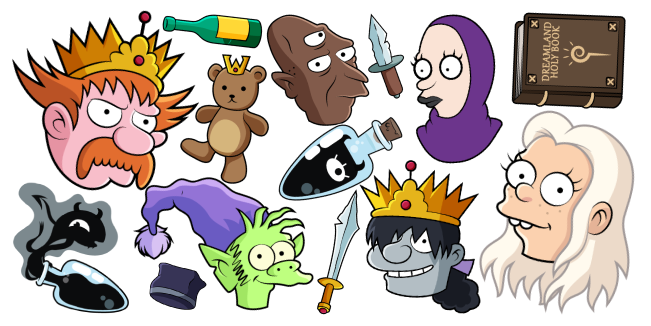 Put a bit from Futurama and The Simpsons, and you would get Disenchantment, an animated satirical fantasy sitcom made by Matt Groening for Netflix, who has created the previous series.

Disenchantment tells us about the medieval European kingdom of Dreamland, following the story of Bean, a revolutionary and adventurous princess with the full name Princess Tiabeanie Mariabeanie de la Rochambeau Grunkwitz, along with her elf companion Elfo, and her destructive but caring personal demon Luci which you already can find in our Disenchantment cursor collection. Through four seasons, this band explores Dreamland and other neighboring lands and uncovers a mythical conspiracy, joking about some daily situations of everyone.