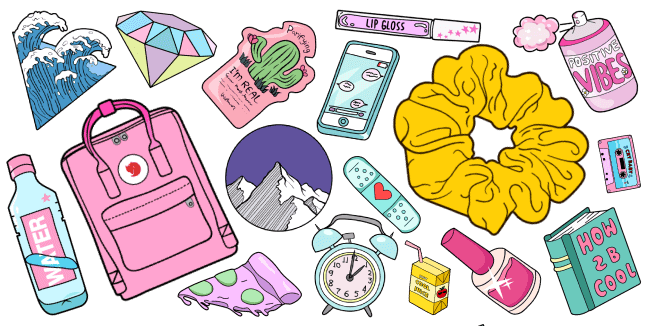 VSCO Girl is a youth subculture common among girls who often use the VSCO application and have a certain set of accessories. Typically, these are hydro flask water bottles, chokers, Airpods, polaroids, etc.

People started talking about VSCO Girls in the early summer of 2019. But, of course, the origins of this phenomenon are more ancient. The VSCO application, which allows you to process photos, appeared in 2011. A wide circle of people using those four letters for hashtags on Instagram. Since about 2015, they often began to appear under the photos of young girls.

In support of this culture, we are creating a VSCO girl collection of fanart cursors. We are gathering here accessories of real VSCO girls as cursors. Such as Carmex with Scrunchy cursor, Cap with Kanken Backpack cursor, Crocs Clog with Penny Board cursor, and many more fanart and our own cursors.

VSCO Girl Smartphone and Be The Sunshine Curseur

VSCO Girl Watermelon and You're So Golden Curseur

VSCO Girl Save the Turtles Curseur