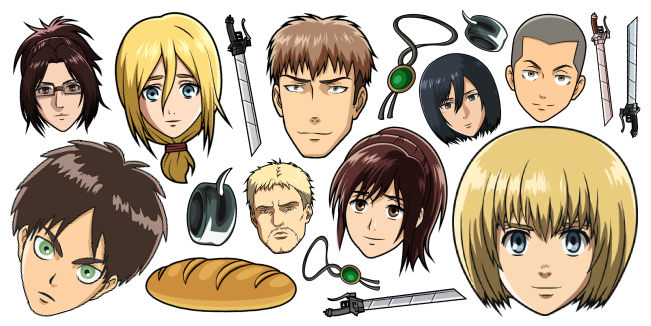 Attack on Titan is an anime series based on the manga of the same name by Hajime Isayama. It was produced by Wit Studio and Production I.G for the first three seasons and by MAPPA for the fourth. It has become so popular that there are already 4 video games based on this manga.

Attack on Titan takes place in the world where people live inside cities surrounded by huge walls - to protect them from big creatures Titans - who make trouble to people without any reason. The story is about Eren Jaeger, his adoptive sister Mikasa Ackermann, and their good old friend Armin Arlelt. Pointers with them you already can find in our Attack on Titan Cursor Collection. Back to the story, their lives have changed in one moment when a Colossal Titan came and destroyed their home and killed Eren's mother. With a desire to revenge and take back the world from the Titans, these three characters join an elite soldiers group who fight against Titans outside the Walls, and the name of this team is the Scout Regiment.

In our Attack on Titan Cursor Collection, you can also find other hero cursors. Among them are cursor with Sasha Braus and Bread, a pointer for a mouse with Jean Kirstein and Sword, Connie Springer and Sword cursor, Levi Ackerman and Reiner Braun as a cursor, and many others. Still hesitating? Hurry up and pick your favorite cursor!