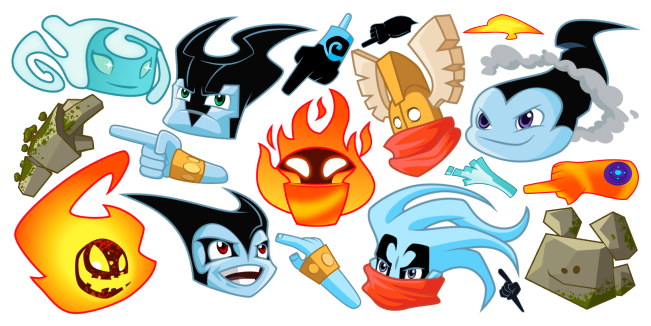 Tornado Outbreak is an action-adventure video game developed by Loose Cannon Studios and published by Konami Digital Entertainment. The game follows Wind Warriors, a noble group of Air Elementals given the task of providing an atmosphere on lifeless planets led by Captain Nimbus, which you can already find in our Tornado Outbreak cursor collection.

The player takes control of a blue spiraling Wind Warrior named Zephyr, who has been selected by Nimbus to take over the reins of the squad of Wind Warriors. The Wind Warriors team along with Zephyr and Nimbus uncover the anti-matter being known as Omegaton, whose six orbs of power were taken away from him by his enemies like flaming little creatures known as the Fire Flyers. In return for helping him regain his orbs of power, Omegaton provides the Wind Warriors with a Light Weight Object Amalgam Device to protect them from the sun's deadly radiation. In a few words, that's a pretty interesting game with history, characters, and visualization.

If you are a fan of this amazing game, then we have a fanart Tornado Outbreak cursor collection with your favorite characters as game cursors. Among them is a game cursor with Stratos, Cyclone pointer, game pointer with Water Whirl, Stone Stomper cursor, Nimbus as a game pointer, cursor Zephyr, Omegaton pointer, and many other characters from this wonderful game.