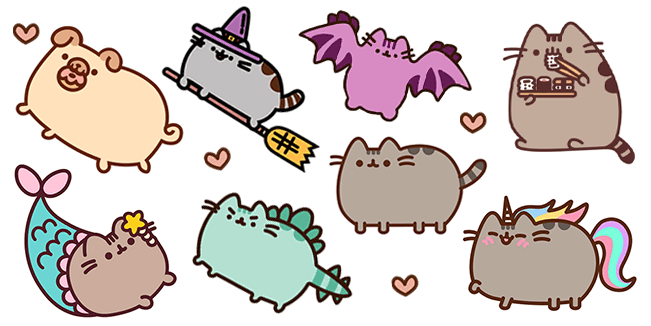 Pusheen is a tabby cat who brings smiles and laughter to people all around the world. She lives with the parents of her creator, Claire Belton. Claire took that cat home from an animal shelter when she was just a little cute kitten.

When Belton's were choosing the name for the new kitten they remembered, that in Irish kitten is called – puisin. That’s why they called her Pusheen the Cat. She is a little bit lazy cat, she likes to sleep a lot and to be in a center of attention. She also likes to eat a lot. She became famous through her animated comics and GIFs posted on Pusheen.com, as well as through her widely used stickers on social media.

Today, the Pusheen brand is a global phenomenon with a growing cast of characters, tens of millions of fans worldwide, and licensed merchandise available in more than 60 countries. For those fans we a presenting a Pusheen collection of fanart cursors with a variety of Pusheen themed cursors. Like Pusheen playing cursor, Pusheenicorn cursor, Pugsheen cursor, Dinosheen cursor, Pusheen eating cursor as her favorite hobby, Halloween spirit Pusheen witch cursor, and many more fanart cursors.

Курсор Pusheen with a Book

Курсор Pusheen with a Laptop

Курсор Pusheen on the Phone

Курсор Pusheen in the Box