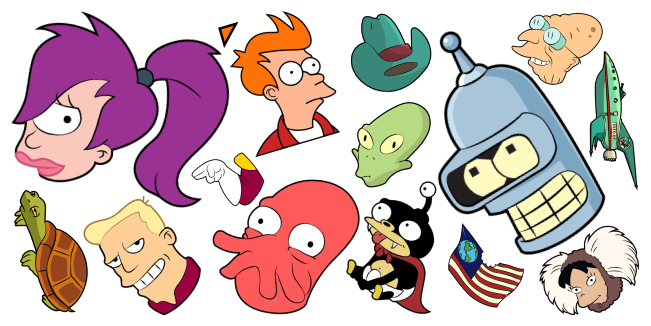 Don't tell us that you don't know anything about Futurama, an American animated science fiction sitcom created by Matt Groening. It is practically a workplace sitituation comedy, the plot of which revolves around the Planet Express, an interplanetary delivery company and its employees, a small group that always fails to conform to future society. Episodes are usually going around the central trio of Fry, Leela, and Bender, though occasional storylines center on the other main characters.

The series follows the adventures of the main character, professional slacker Philip J. Fry, who has been cryogenically preserved for 1000 years and then revived in the 31st century. He finds a job at an interplanetary delivery company, working with the one-eyed woman Leela and sarcastic robot Bender, which you already can find in our fanart Futurama cursor collection.

If you are a great fan of this animated sitcom animated series since your first days, and to have them around you all the time, you can find them here as cartoon cursor with Futurama Amy Kroker, Futurama pointer with Kif Kroker, Turanga Leela and Nibbler cursor, Futurama cursor with Dr. Zoidberg, cartoon pointer with Farnsworth and Planet Express Ship, Futurama cursor pack with Zapp Brannigan cartoon cursor and many more cursors with favorite characters are coming.