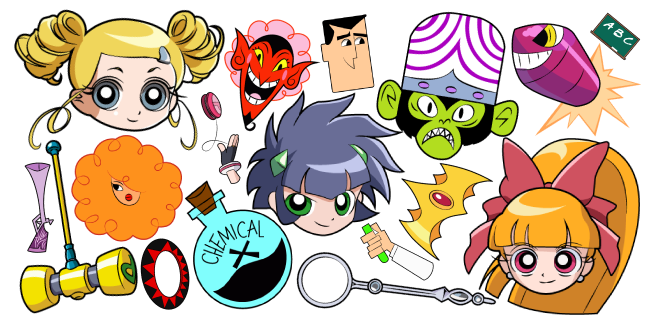 Powerpuff Girls is an American animated television series starring a trio of kindergarten-aged girls with superpowers named Blossom, Bubbles, and Buttercup. By the way, you can already find them in our fanart Powerpuff Girls cursor collection.

These girls are the defenders of the fictional metropolis Townville against different enemies happening from time to time. The leader of this trio is the red-haired, level-headed Blossom. The other two are the sweet, blonde, and often underestimated Bubbles and the quick-tempered, black-haired Buttercup. According to the lore, they appeared thanks to the good-hearted scientist Professor Utonium, who was attempting to engineer perfect little girls in his lab. He accidentally added to the mix a mystery ingredient called Chemical X. The result was the three superheroines, whose round heads resembled powder puffs.