Коллекция курсоров Seraph of the End 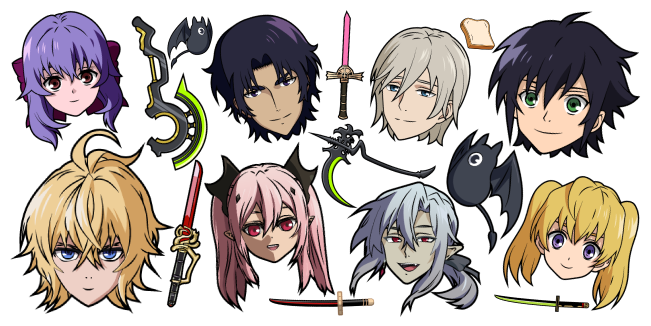 Mythical series named Seraph of the End or Seraph of the End: Vampire Reign is a Japanese dark fantasy manga series written by Takaya Kagami and illustrated by Yamato Yamamoto. Owari no Seraph tells us about a world that step by step comes to an end at the hands of a human-made virus, destroying the global population and leaving alive only children under the age of thirteen. After that vampires appear and arise from the recesses of the planet, likely followed by age-old horrors of the dark previously thought only to be myths.

For the next few years, Yuichiro Hyakuya and his fellow orphans, which you can find as fanart cursors in our Seraph of the End cursor collection, at the Hyakuya Orphanage were treated as some farm animals, only being allowed to live for their blood. Desperate for freedom, Yuichiro, and his best friend Mikaela create a plan to escape with their family to the outside world, where Yuichiro joins the Japanese Imperial Demon Army, to fight against their enemies.