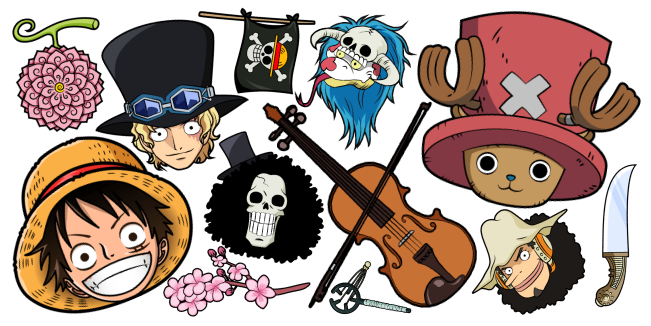 One Piece is a popular anime and manga by Eiichiro Oda in the comedy, adventure, fantasy, and shonen genres. Also, under the One Piece brand, films, games for various consoles and several OVAs have been released. Interestingly, One Piece manga has become the most popular in Japan and one of the most popular all over the world.

The plot of the anime begins with the pirate king Gol D. Roger talks about the legendary treasure called One Piece, which he left on the most dangerous and mysterious island in the world, the Grand Line. Because of this, adventurers and pirates from all over the world set out for incredible wealth. Among them was Monkey D. Luffy in the form of our anime cursor Monkey D. Luffy and Flag, who dreams of finding a great treasure and becoming the new king of pirates.

The characters in the One Piece world are unique in their superhuman stamina, physical strength, great speed, and varied abilities. The Straw Hat Pirates are the main characters who follow their dreams and, thanks to this, became not just a team, but a real family. From this crew, you can choose pirates like One Piece cursor for a mouse Brook and Violin, anime cursor Tony Tony Chopper and Sakura Blossom, One Piece Roronoa Zoro and Sword cursor for a mouse, fanart cursor with One Piece Usopp and Slingshot.

One Piece Yamato and Kanabo Cursor

One Piece Kaido and Kanabo Cursor

One Piece Nico Robin and Hana Hana no Mi Cursor

One Piece Sabo and Pipe Cursor

One Piece Shanks and Sword Cursor

One Piece Brook and Violin Cursor

One Piece Usopp and Slingshot Cursor