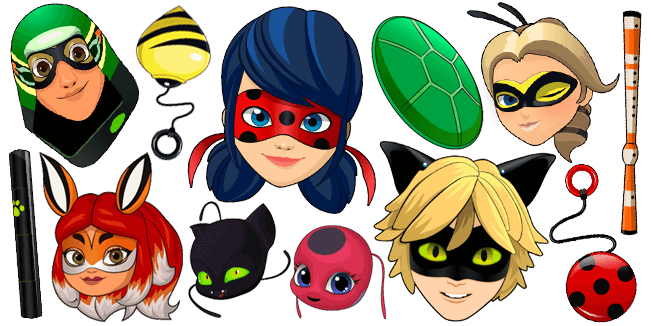 Miraculous: Tales of Ladybug and Cat Noir known as Miraculous Ladybug and Cat Noir is a cartoon superhero story about two high school classmates who act as masked crusaders protecting the city of Paris from the evil schemes of their villainous nemesis. Miraculous is made in France with computer graphics animation. Miraculous is famous not only as a cartoon title, but it also had a collection of comic books released in the United States and worldwide.

Miraculous plot happens in modern-day Paris, where Marinette and Adrien are two high school kids, but with a huge difference. They are chosen to save Paris from the forces of evil. Their mission is to capture akumas, creatures that can turn a normal person into a super-baddie. When they become involved in such adventures – they become superheroes.

Marinette can transform into a Ladybug, and Adrien becomes Cat Noir, but our heroes don’t know each other's true identity.

Now you can help Cat Noir and Ladybug to save Paris with a fanart collection of Miraculous cursors, that feature your favorite characters. What character will you choose for your cursor? Will it be Miraculous Ladybug cursor, or, perhaps, a cute little Ladybug Tikki? Cat Noir cursor or Plagg with cheese cursor? Or maybe Queen Bee with Rena Rouge cursors, followed by Carapace cursor… It's only for you to decide.